I was going to title this post "I give up", but that has really negative connotations, and this is not necessarily a negative communication. But I have finally, without a doubt, surrendered to the torrent of ever-changing rules from GW this year.
I'm not even sure if "surrender" is a neutral enough word. I've just realized that I am not at a point in my life where I can manage to afford or even have the energy to collect a comprehensive set of rules for 40k. As I stated in this little rant from years past, I am not a stickler for much in my gaming life, but I DO like to have a complete set of rules. 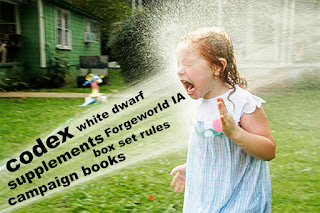 But it's basically impossible now unless you literally own everything that GW puts out. I was probably the only person on the Internet that was excited to see the Age of Sigmar rules. It felt like GW was going to start putting out free only codices and data sheets for 40k as well, but that is not to be.

So now we have a meta that has "most" of the rules, and we often rely on the same sites for information, which trickles down into creating similar lists and recursively stagnating the meta. This, combined with my FLGS's complete lack of 40k activity and the rise of other con-level game systems, has me making a drastic personal decision.

I'm no longer going to chase the complete set of rules. I'm not longer going to try to min max my lists (I was never really a fan of that any way). I will not attempt to play 40k tournaments. I will not agonize over which models I should get over what I think is cool. I'm done with this race.

What I will do in 40k is finish painting the models that I actually own. I have about 2k in DE, 2.5k in SM, 2.2k in GK and 2.5k in CSM that I need to get painted. I was psychologically crippled by analysis paralysis, but no longer. I'm equipping the models as I see fit. If later, I find that I want to play competitively, I will reevaluate and buy what I need to.

On the FLGS front, I will most likely get in a few games of either Warmahordes or Malifaux, or maybe even X-Wing. Although I really enjoy all of these systems, the fluff of 40k dominates in my mind like no other system.

At home, I plan to devise some custom scenario-based games of 40k...larger than Killteam...probably 1200-1500 points, with lopsided objectives. I'm going to use GW's 'living document" approach to rules as they were intented: for highly personal games based on your existing models.

So expect many more painting posts in the next few months.

How do you keep up with the ever-growing, ever-morphing rules and data set?