Like Nagash, I'm returning this week after a long (six month) absence. Hello, readers, sorry for abandoning you. I'll have a separate post for why I've been out of the blogosphere, but today, let's talk about buildings. Particularly, buildings from a little known vendor Novus Design Studios.


I had a gift certificate to burn at my not-so-local FLGS, so I went to peruse some terrain. I was in a bit of a hurry, so when I saw these four packages hanging from a peg and noticed their prices, I just bought them without inspecting them closely. They certainly looked OK in the bags, as well as on their site.


These are made of a sturdy resin with a lot of textures and interesting features. The four together add up to about $100.00 US, bringing them in line with Games Workshop's Imperial Sector. These are a bit more "true scale" than other resin buildings from casters like Arrmorcast, whose buildings skew a little small to emphasize the cinematic epicness of the miniatures you place in them.

Out of the bag, there were some issues. How major the issues are is questionable. I will not pass judgement, but I will point them out.

So the first issue I had were the little bubbles and pimples. I'm not talking about the intentional battle damage. Just above the armored door, you can see some casting issues in the little hole and in the grooves. There are dozens of these imperfections in the cast. How important that is to you is...well...up to you.

See that little blue thing? That part of the mold this model was pulled from, which frankly makes me worry about the next one from this mold. I wouldn't even mention this, but they were almost impossible to remove completely without damaging the model. I tried tweezers, a razor, a needle, and an Xacto. There was still a bit of it left. It was molded into the resin. There were 4 of five of these on each model.

Two other less important issues. First, the building are just swimming in mold release. I soaked and scrubbed them with a great deal of effort, and there were still spots that wouldn't take primer.

Also, there was some warping of the walls due to lack of support. Now, I'm had Forgeworld resin that arrived with panels warped at near-right angles, but the resin of these buildings do not become very flexible when soak in hot water, and they seem to have a memory, going back to its original warped state when cooled.

The final issue is much more subjective. At first glance, these buildings look fine, but there are some questionable design decisions that I don't understand. For example, although these are completely open-top, the interior walls are not only bare and "undesigned", but the interiors do not match at all with the exterior. Who ever actually built the originals did not take into account ANY real-world architecture.

So here's one of the buildings painted up and with some plasticard and a few Dragonforge cases added. I also added a balsa wood support beam to relieve the warp. 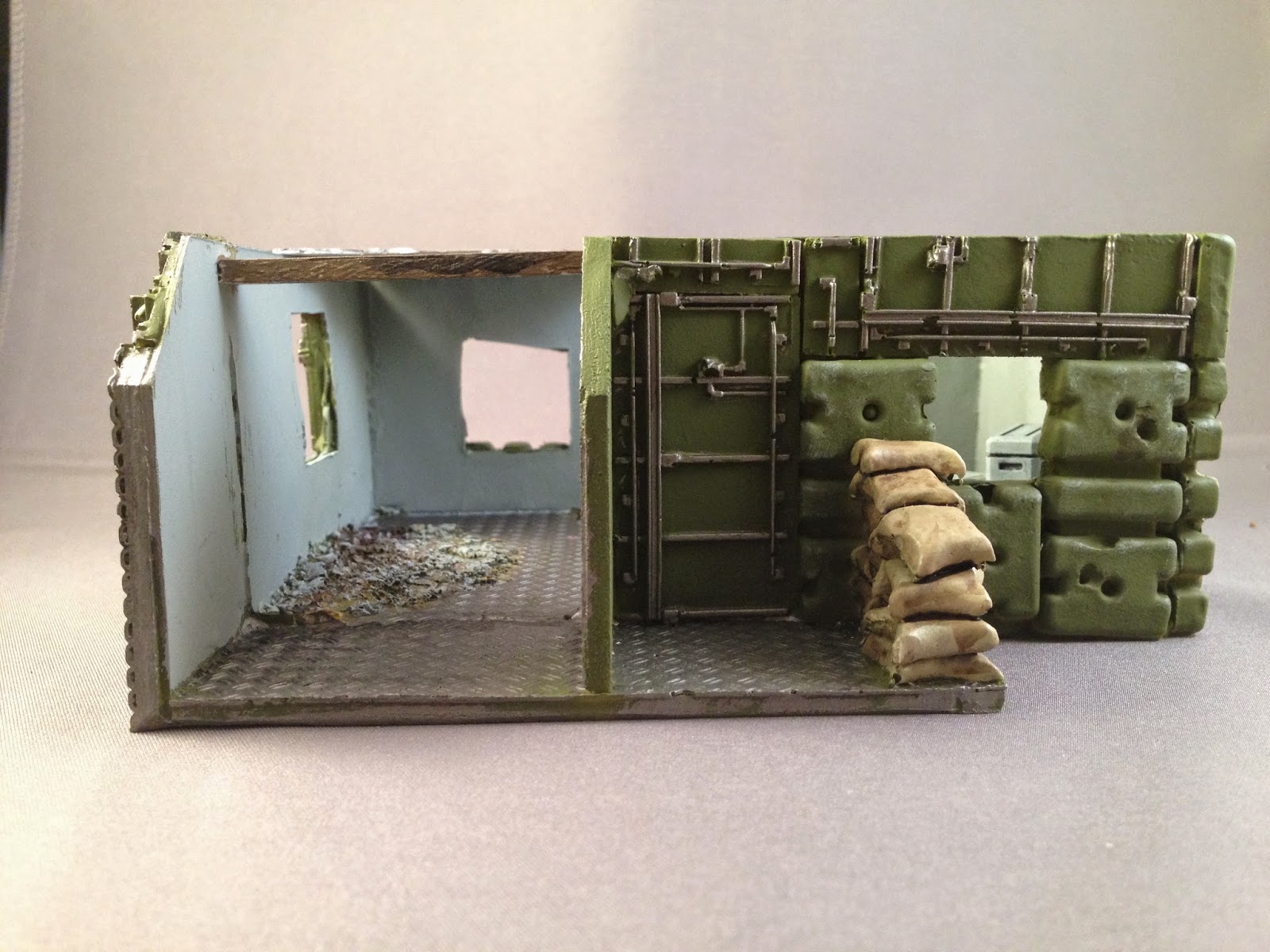 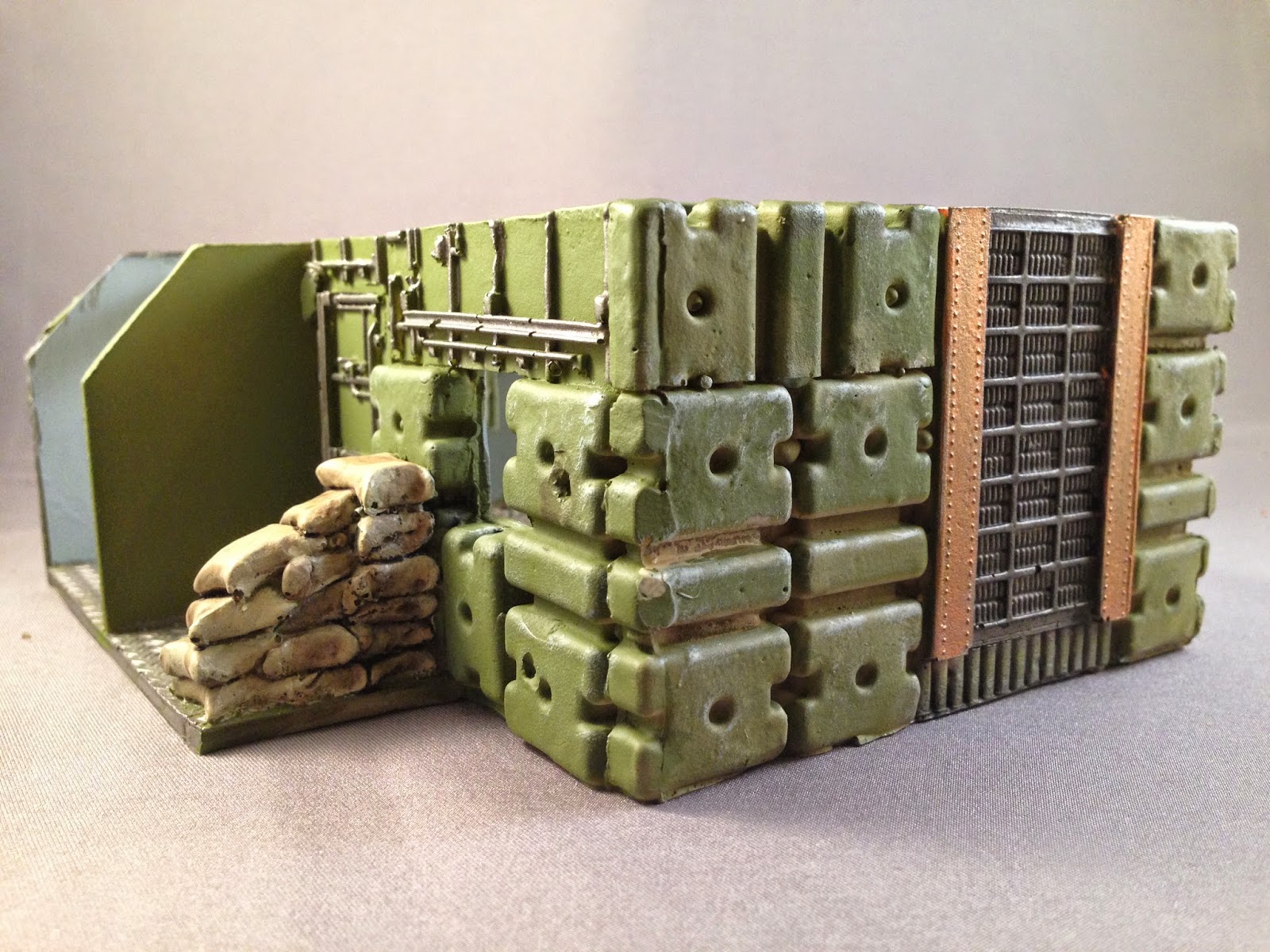 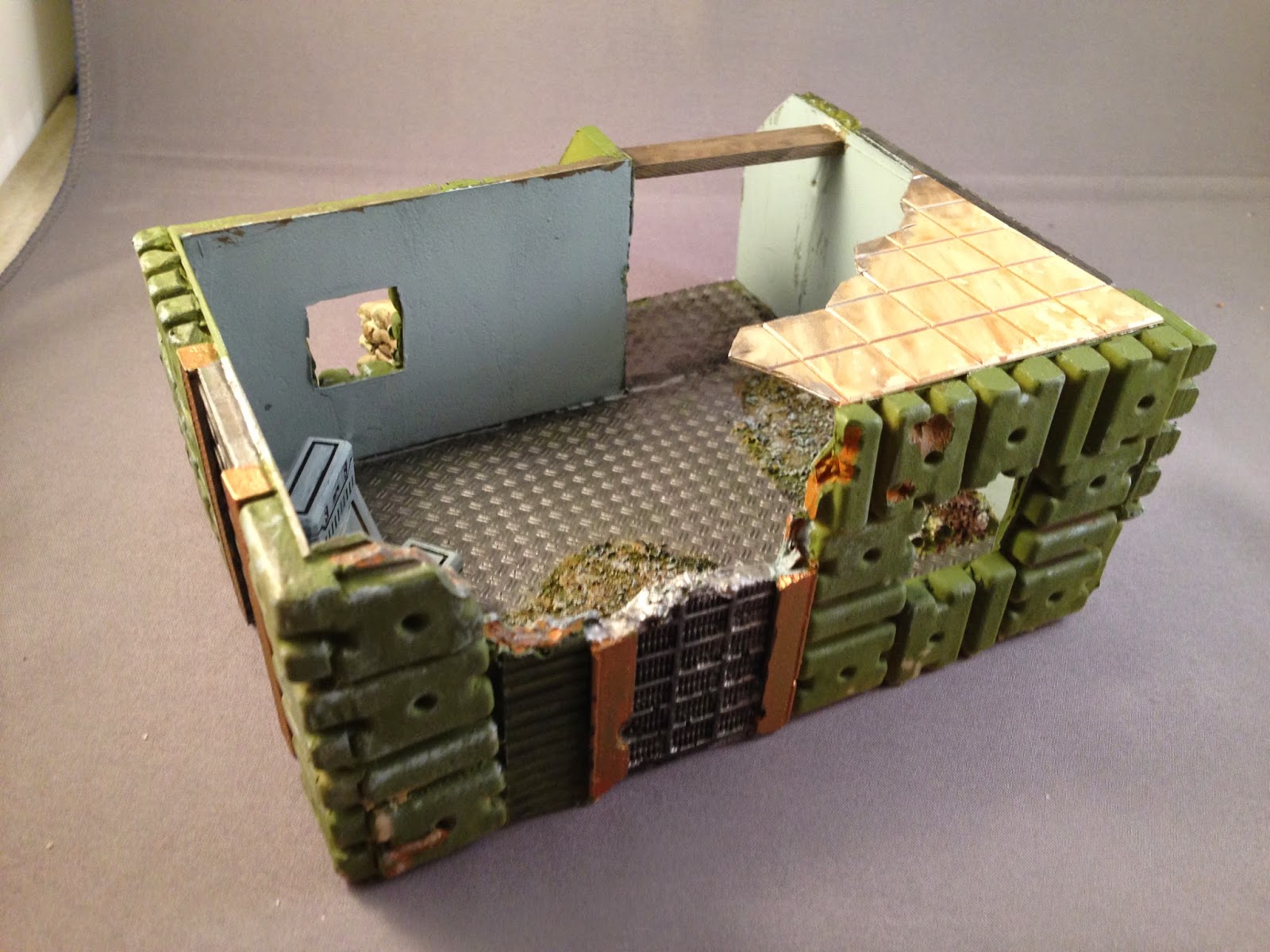 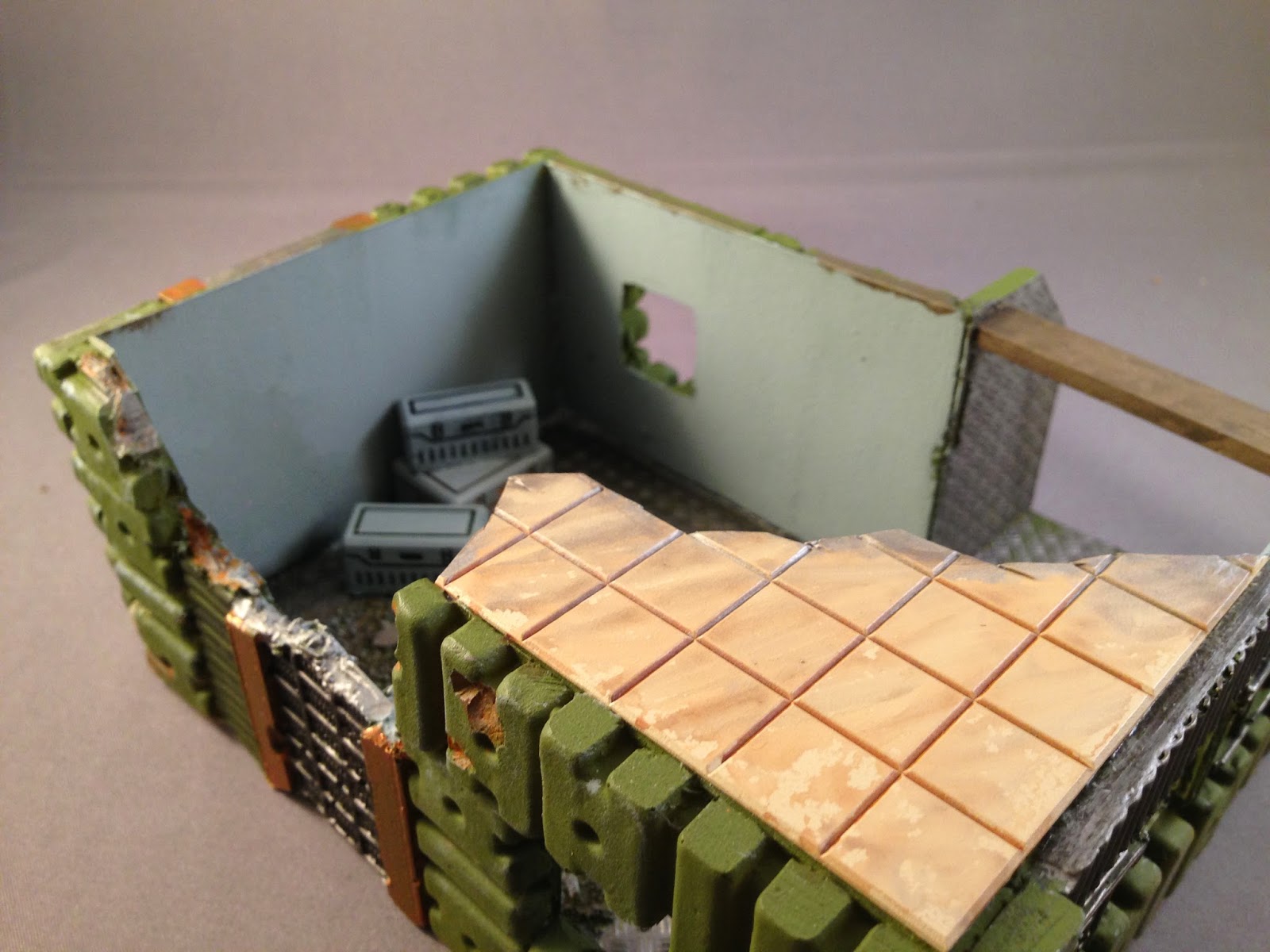 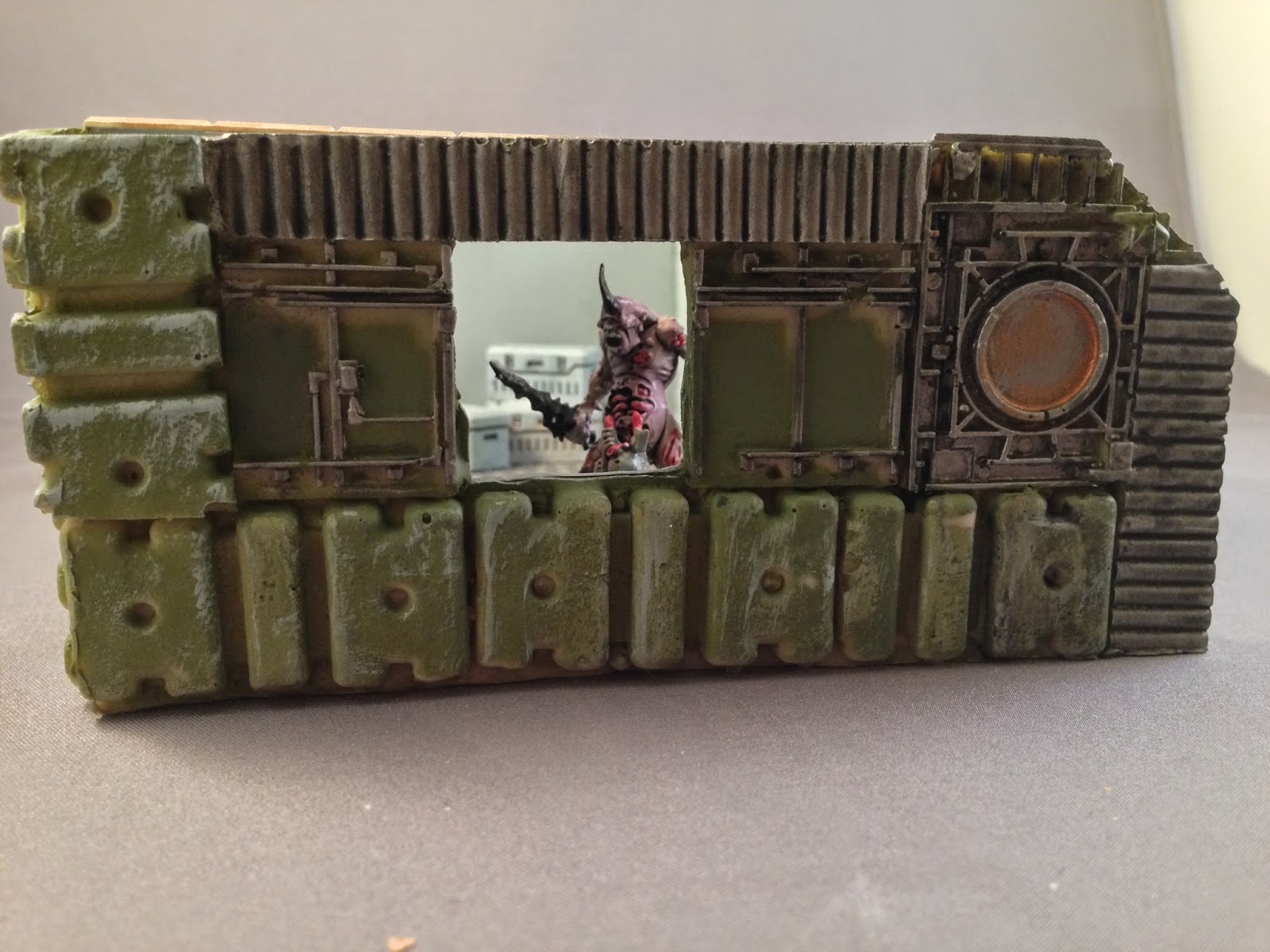 As you can see they are quite evocative of DUST or 40k, and I would have no reservation putting them on a gaming table. They are sturdy and not brittle, and I imagine that they would withstand quite a bit of use.

As a display piece, though, I have reservations. The detailing is inconsistent with one wall having diamond plate and the adjacent wall with nothing. The places with battle damage make no sense in terms of painting and placement.

My verdict? Well, the price is decent for the amount of resin and labor hours. I can't see a freestanding building like this sell for much less, but it's obvious that GW buildings are simply more detailed and make a bit more "sense". So while I would not explicitly recommend them, you should definitely consider them when shopping for buildings.

And I definitely look forward to seeing more of their products in the near future.