So I'm noticing that more and more people are blogging about Adepticon, so much so that any sort of summary on my part would be redundant and incomplete. So I thought I'd take the next few posts just to talk about some of the fun stuff I found there. I'm sure even these personal thoughts will be covered elsewhere, but, well, on with it!


I wanted to show you my absolute favorite army I've seen since I started attending Adepticons.
[read on]
At first glance, I thought they were Counts As Skaaven, but they are Chaos Dwarves! My only issue this army was that so many people were trying to photograph it I kept getting bumped and jostled (hence the blurry photos). It bordered on downright hostile.
Even more than all the sculpting and converting, what impressed me the most was the obvious care and commitment put towards the concept. The machinery is appropriately evil genius-ish. Each minion has a specific expression. Just amazing. 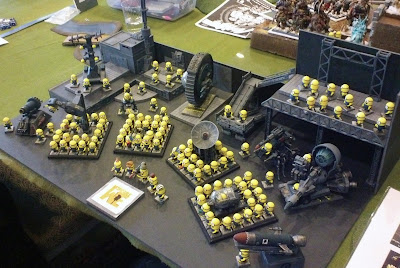 I don't play fantasy but I could easily see this becoming an Ork army for 40k. Well done, gents!
at 11:19 AM