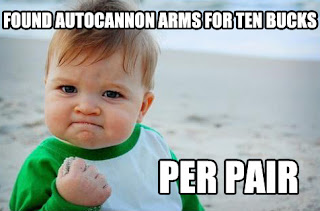 Well, the autocannon arms from Shapeways arrived, which is oddly topical, since BOLS has a 3D printing controversy posted right now. If you want to know where I sourced these arms, you may want to check out my original post on the subject. The details of 3D printing are beyond the scope of this review, but there is no shortage of information out there on the subject if you want to learn more about it.

The package arrived exactly when Shapeways said it would, and the products were packaged adequately to minimize the effects of shipping. So let's check them out, shall we? {JUMP!}
Here they are, straight out of the baggie:
Since this is 3D printing, there were no mold lines or sprue. The tolerances are very fine as you can see by the super thin support strut above the barrels. If this was finecast, I would just snip those parts off while dealing with all of the resin flash. I haven't tried to paint one up yet, but it feels like a polystyrene, which would be ideal.


Whoever did the actual CAD on these was pretty clever (I think the person/vendor goes by BlackBitz, but the name is unfamiliar to me).  They are very obviously meant to be Rifleman arms, but they look different enough, in my opinion, to avoid legal hassles in this one case. The mounting hole is sized to be compatible with dreads from the Assault on Black Reach set, and they are perfectly snug. As I mentioned above, it's obvious that both the designer and the fabricator are very precise.

There are some downsides to this type of manufacturing technique. If you look closely at the picture above, you can see that the surface has a noticeable grain to it. I think this is unavoidable with smaller format, lower resolution printers, and it may also have to do with the materials utilized. I can't tell if it's a problem yet since they haven't been primed or painted yet. It's definitely something to be considered. Personally, I think this will be a non issue, but I've been wrong before.

I find this low-volume manufacturing methodology much more compelling than casting, probably because I really suck at casting. I'm hoping that people will not do something stupid to ruin this for everyone. There are already people using 3D scanners to copy proprietary ip and then making copies via 3D printing. Instead, I would like to see GW-compatible designs for things that are very rare or difficult to obtain. Cyclone missile launchers come to mind...

I apologize for using a Furioso Librarian as the test bed, but he's the only dread I have built at the moment without a magnetized arm, and he's the only AoBR chassis that I have with an arm free. You can see that these arms are perfectly designed for those bargain dreads in the Black Reach box. They pushed together easily

but have enough friction to keep the arms in place.

Well, Shapway's price is great and the customer service is very sophisticated. I would love to see more business go their way to encourage other uses of the technology that have to do with gaming. Thumbs up!
at 9:19 PM