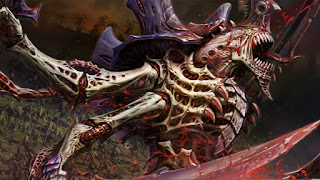 A few years back, prior to any Mechanicus models or codices were released, a friend of mine Lantz created a homebrew Mechanicus codex and a set of converted models. It was quite striking, and the points and abilities were well thought out. Very shortly afterwards,
there was an announcement regarding the official release of the Mechanicus and Skitarii codices. Lantz very graciously sunsetted his rules. I had written two pieces of fluff for that book. He wanted to portray brief conflicts between the Mechanicus and various factions. I was lucky enough to get Chaos and Tyranids.

What follows is my one page story about a tech-adept with just a few minutes left to live. The other story will go up later in the week.

Adept Chronon knew that it was just a matter of time.

He could see the trail of blood and viscera that led away from the gaping hole in his chest to what was left of his organic heart, now lying in a black-red puddle under his secondary cogitator in the corner of the lab. He realized that even before his augmetic respiration and circulation mechanisms failed, his mechadendrites and power arm would lose power and release the slathering, chomping creature that they held in a crushing grip. He had managed to close the blast door before the uncountable number of these swarming, relatively small xenos infiltrated his lab, but he still had to kill 6 of these relentless monsters one at a time, losing his organic arm, one foot, and the aforementioned heart in the process. Under normal circumstances, he would have dispatched them easily, but this was the fourth day since the equatorial photovoltaic collectors went offline, choked by falling spores; Chronon, and he presumed the rest of the planet, was surviving on dangerously low power reserves. He was sprawled on the floor with the creature held above him like a horrible infant. He slowly lowered his head back onto the cold marble. He calculated the power savings of not taxing his neck and clavicle servos.  With no other variables, resting his head would allow him to maintain his grip for an additional 10 minutes.

Chronon knew it was just a matter of time.

He closed his eyes and let part of himself drift into the Noosphere. He tried to make sense of all that had happened since the beginning of this invasion – no, invasion was inaccurate; it was a harvest. It had begun with orbit-bound astropaths reporting a wall of nothing impeding their communications.  A few weeks later, a raft of small meteors came hurling from the shadow in the warp, followed by capital ship-sized abominations of tendrils and flesh. As the meteors impacted the surface of the planet, they vomited forth the stuff of madness. Some teemed with leaping, man-sized creatures with scything claws dripping with toxins. Others released huge, lumbering hulks that launched two-part organic munitions. Yesterday, Chronon observed two of these living superheavy tanks take down a Warlord Titan. The firestorm caused by the sentient projectiles was caustic and incendiary enough to melt the titan up to the torso. Worst of all, though, were the psychic beings. Sickly, vestigial bodies hung like butchered meat from huge levitating crested heads, and the Skitarii that ventured too close to them instantly died, their brains boiled in their skulls. Chronon marveled at the sheer variety and adaptability of these invaders. He went deeper into the Noosphere, trying to cross-reference the terrible images in his mind with any mechanicum-indexed information. He found what he was looking for in the archives of the Magos Biologis of the Tyran System. These same creatures had completely scoured Tyran Primus of organic material, leaving a dead rock in its wake. His link was failing, but he managed to ingest all of the information from the Magos along with supplemental material from both the Adeptes Astartes and the Inquisition itself. The terms swept by in a wash of binary code – Hive Fleet, Carnifex, Hive Tyrant, Venomthrope…the taxonomy that Terra and Mars had applied was strangely evocative of the nightmares of his barely remembered youth. These “Tyranids” had either spanned the Segmentum in an unbelievably short time, or the tendrils of their fleet were incomprehensibly vast. As his mechadendrites began to shut down, the creature (“rippers”, they had been labeled) began to thrash more wildly, anticipating a feeding. Chronon would have liked to have studied this galaxy-spanning, all-consuming race. Had they left a swath of dead worlds for eons, or did they travel in a dormant state? He uploaded his entire memory stream blindly into the Noosphere as his power arm began to whine. The Empire of Man would eventually meet the bulk of this unstoppable foe.