In the five years or so that I've actively returned to the miniatures wargaming hobby, I never thought I would see this day. Back when dinosaurs ruled the earth, my favorite flavor of 40k was Kill Team, a set of rules that GW's specialist games put out for squad-level skirmishes. With a tiny number of models per side, there was no need to play with unpainted figures (a personal pet peeve of mine). You can still find the old rules and fan-updated rulesets all over the Internet, and they've done an admirable job keeping the flame alive. The Heralds of Ruin
are the most prominent group that have done their own version using the Kill Team skeleton. I won't comment on that rule set since this post is about this little bastard.

This is the new boxed version of Kill Team. It's a relatively small box, similar to their "Getting Started" books. Let's take a peek inside.
So in no particular order you have:


So let's back up for a second. Black Library has had an electronic version of the Kill Team rules for sale for a while, but the booklet in this box seems to be updated from the previous version, and they've updated it on the Black Library site as well. This whole package is interesting from the perspective of the intended audience. I think it's pretty genius. Because what you have is an offering from GW that makes sense for a lot of existing players.

In terms of value, this box retails for $65.00 US. The two squads you get, one Space Marine and the other Tau, retail for $40.00 and $50.00 respectively. Then you have the Kill Team booklet, which Black Library sells electronically for $9.99. So right off the bat, you have 100 bucks worth of stuff for 65, which is, within the context of Games Workshop pricing policy, a steal.

But add on top of that the innocuous looking digest rulebook. These are not available separately, most likely because GW knows that no one would buy the BRB. This has been the case since at least 5th edition if not further back. They are highly desired from all of the limited edition boxed sets, and they sell on Ebay for around $20.00.

So this box is, before normal discounting, half the price of the 4 elements purchased separately, which by any perspective is a good deal. I can't see much to criticize about this. 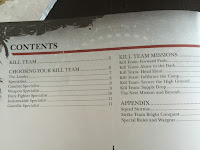 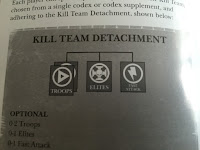 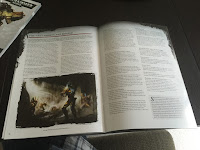 So should you buy it?

Do you already have the squads you want to use in Kill Team and you already have 40k rules in a format you like? Either buy the tablet version of the rules, or buy the booklet on ebay...it's inevitable that they will appear there shortly.

Do you have Tau and SM armies and want a mini 40k rulebook? Yes, by all means, buy this box.

Are you unfamiliar with 40k and want to get started? Well, the rules here are not dumbed down in any way for this release. With this box, you will be playing actual 40k with a small list of restrictions and modifications, but I can't help but think this is hardly ideal. Dark Vengeance or the Vedros box may be a better way to go (I love that GW has "walled off" the Vedros products from the rest of the site. It shows retail multichannel awareness). I could go on and on about getting started in this hobby...I'll save that for another post.

Are you on the fence about Kill Team? Well, what the heck, it's only $65 or less, and you get double the value that y ou can Ebay in pieces if you don't like it.